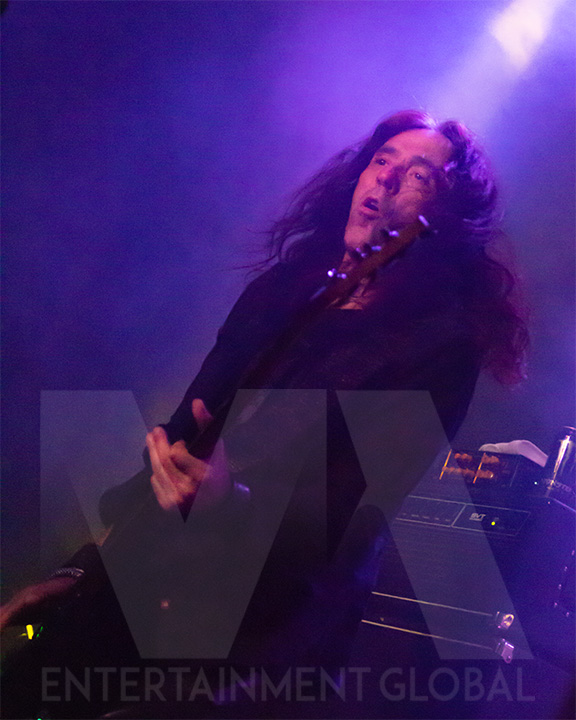 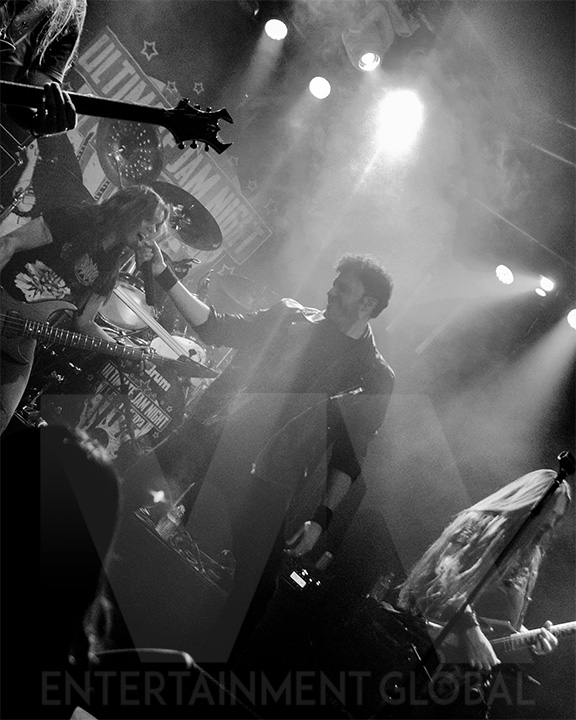 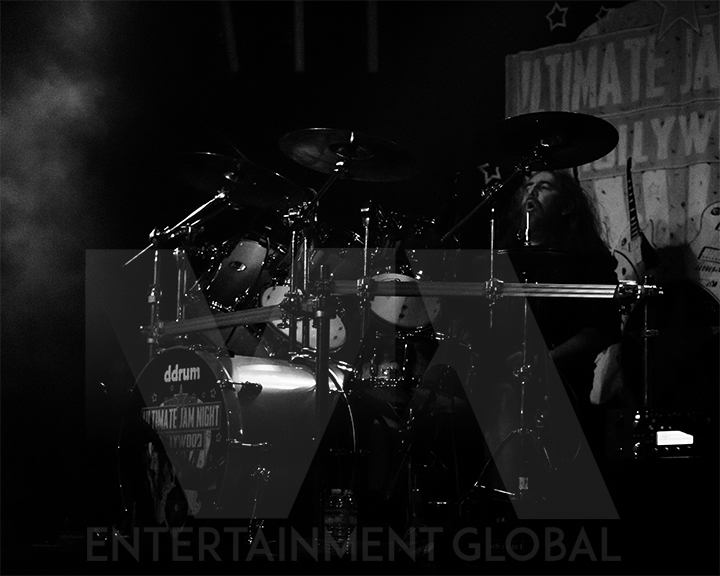 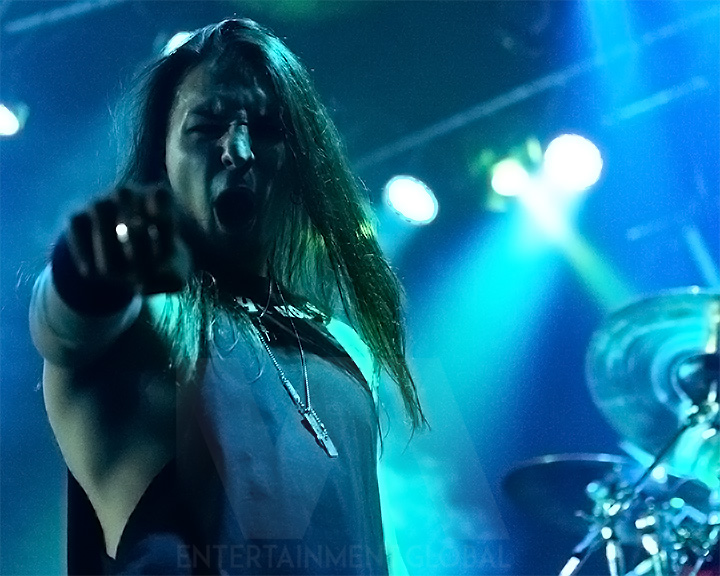 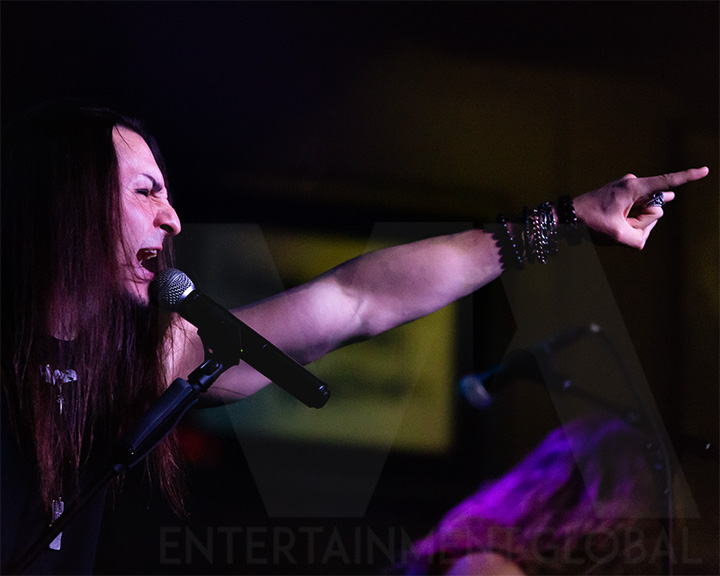 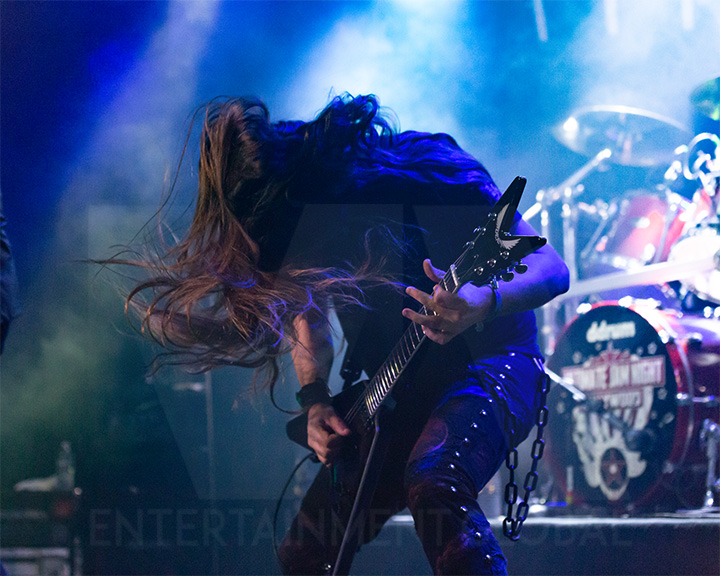 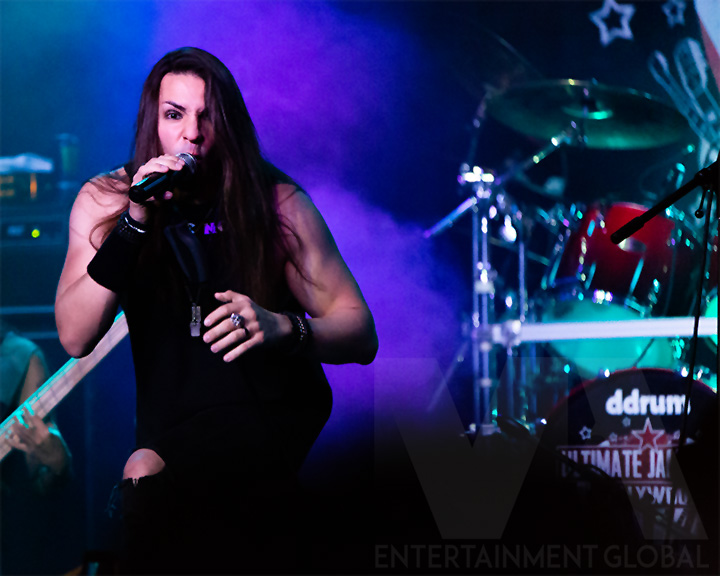 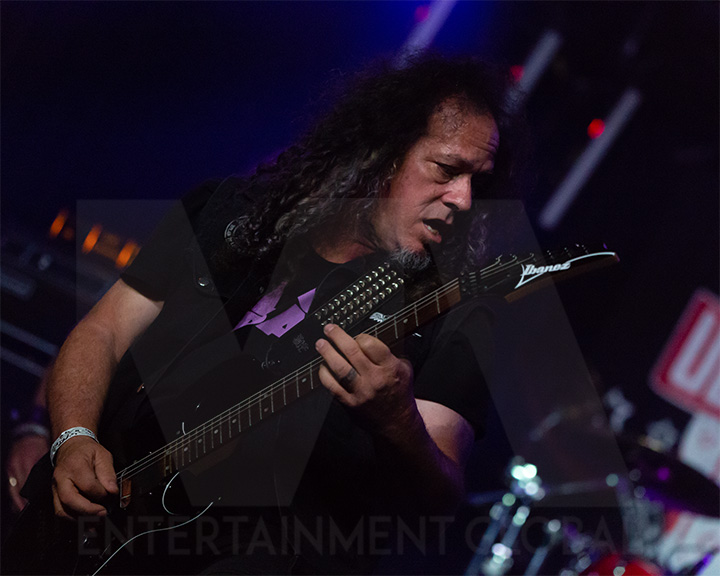 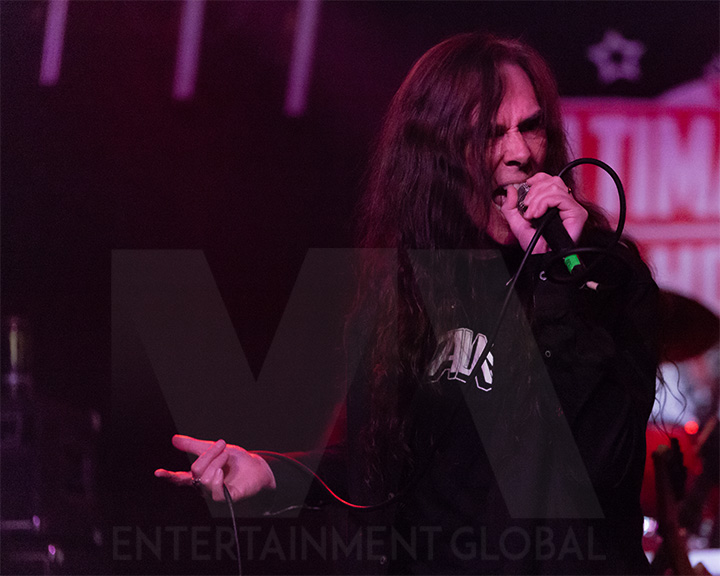 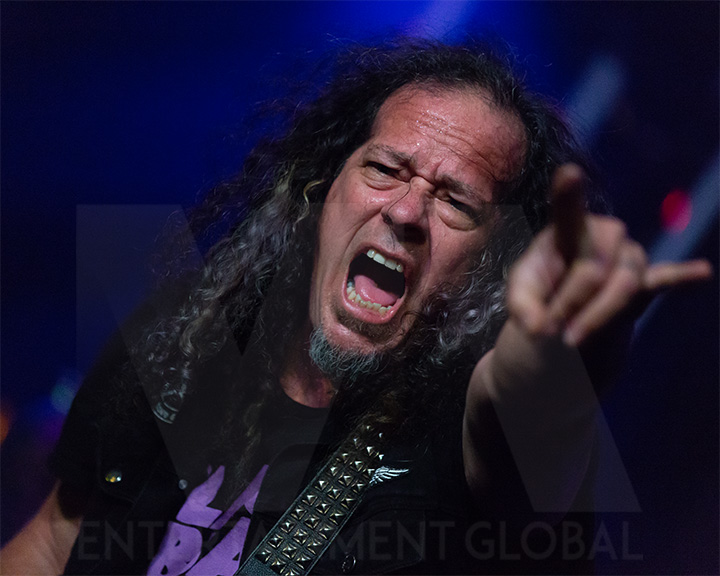 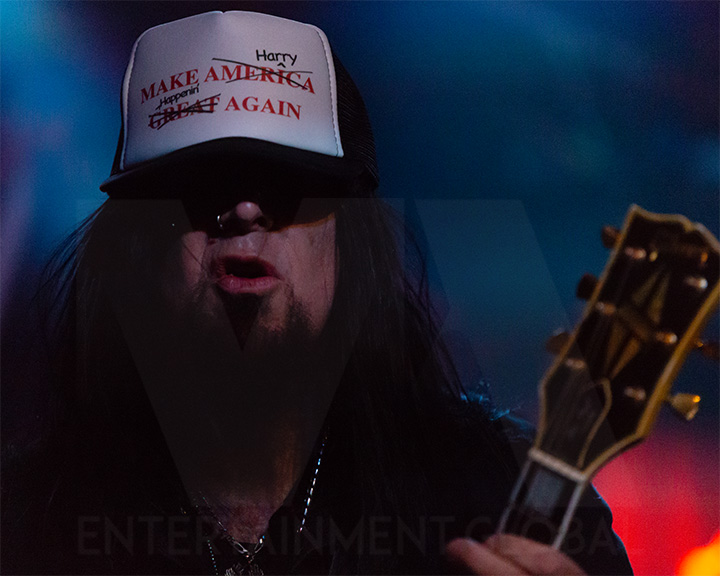 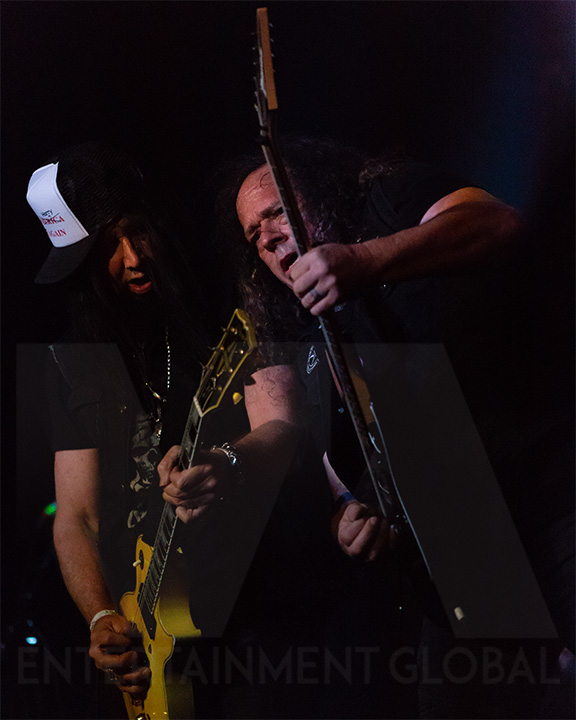 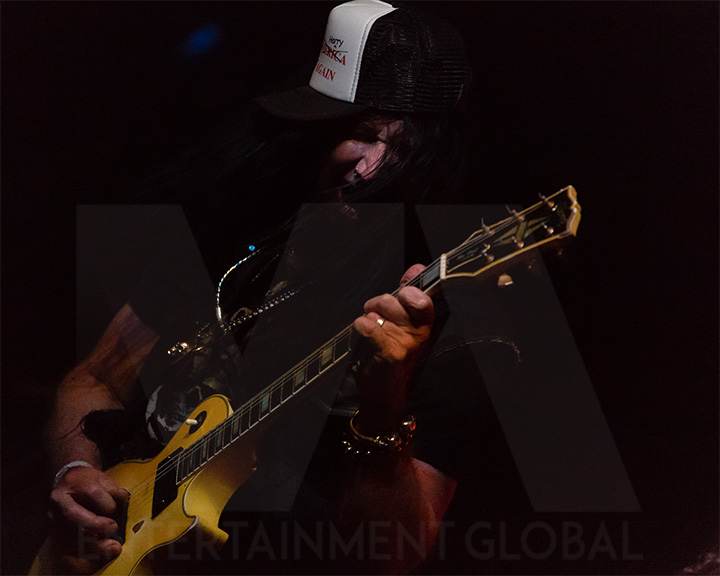 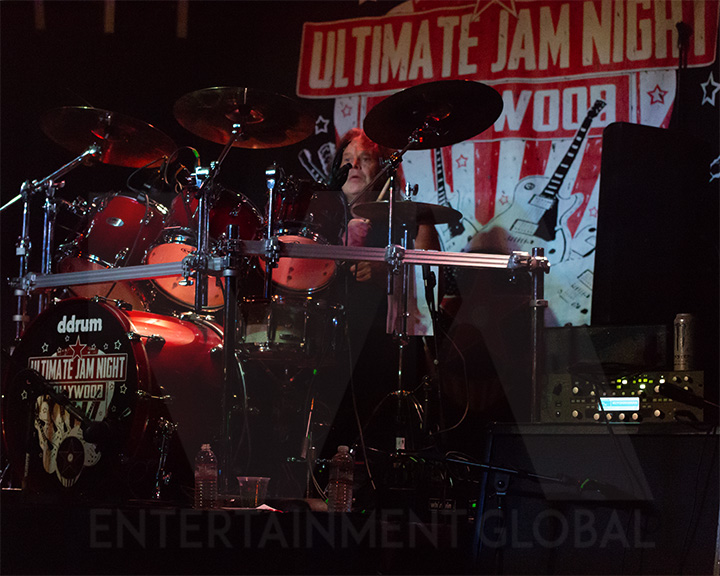 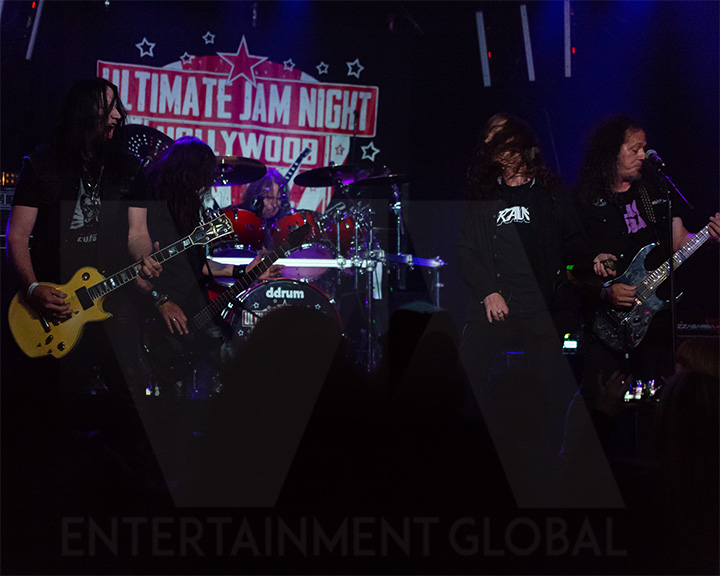 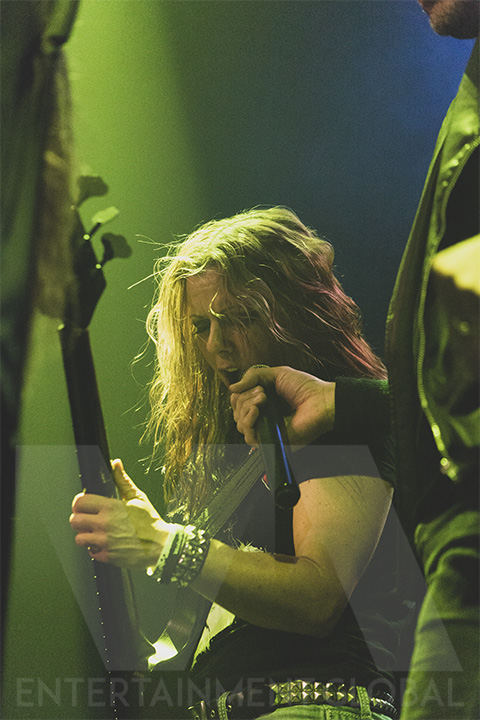 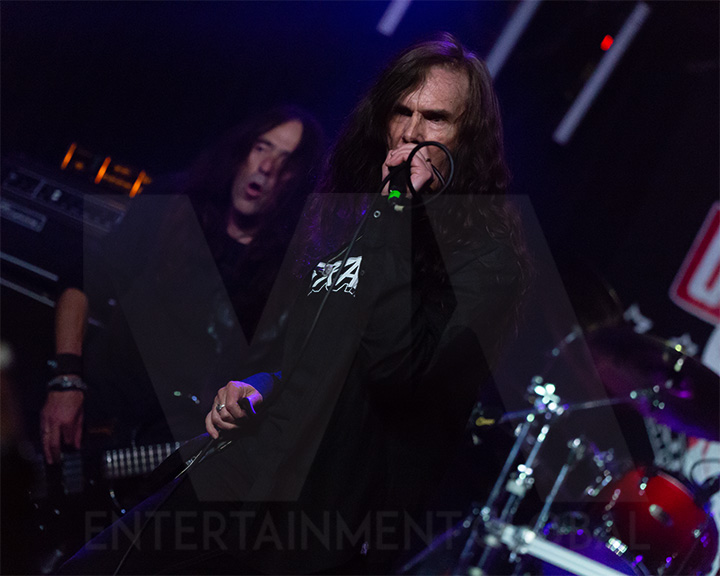 First lets start by saying it was my birthday!! You ask how I wanted to spend my night? At the Whisky A Go Go (Whisky) of course, for Ultimate Jam Night (UJN) - Thrash Night!!

This was my first time for UJN, although I have been there recently to photograph the BulletBoys I have not yet participated in this event. Let me just say that it did not disappoint! It was filled with eager locals and fans ready to see who was going to perform. Although the event has it regulars to JAM OUT, they continue to surprise with surprise musical guests. Also giving the occasional sneak peak of musicians going to perform at the venue in the near future.

I have to say they are very organized. Even with a few issues with the sound the musicians were on and off the stage with little or no delay. Also, the professional musicians made it very easy for me to photograph. You could clearly see the passion for music in these artists and why they do it!!

Some of my highlights were seeing Trauma perform!! I got to meet some of the guys prior at a local pizza joint with weekly performer/house band guitarist Ira Black (I Am Morbid/Dokken). Although we were not there to interview it was nice to just say hi and see the overall energy of the guys ready to perform.

Trauma did not disappoint. Featuring Kris Gustafson, Greg Christian, Steve Robello, Joe Fraulob, and finally Donny Hillier, the band originally formed in 1981, came out with a take no prisoner attitude. The set was heavy and kept the audience moving; I even had to stop myself and JAM a bit between pics. After the show I spoke to guitarist and he gave us the new music to review!! So look out for that; but from what I heard last night I expect nothing but thrashing, rocking, and entertaining music!!!

What was also a rock treat is that Ira Black and some of his younger members of his family were on stage. The kids were rocking and were truly in their rock thrash element. We know rock music is definitely in their DNA!! Even if only by association!! We were pleasantly surprised by their performance and the passion on full display.

“Family night” did not end with Ira, Twisted Sister frontman Dee Snider’s son and UJN regular, Jesse Snider, sang with a bit of thrash and comedy and let the religious journey of thrash and brought the world together in harmony… Rock Harmony that is!! The crown of thorns, which was made by his mother, upon his head showed his “devotion” to his craft and still respecting his fans and family!!

When I left the fans were still in party mode!! They could go all night with these make shift groups. We got to see a lot of new artist this night as well as regular the regular badass’ that roam the Whisky stage. Here are a few of the artist from UJN Ep 154!!!

Former lead singer, Neil Turbin (Death Division/Bleed the Hunger) of the thrash metal pioneers Anthrax, reprised his vocal duties starting the jam night off with Metal Thrashing Mad, what a treat for all true fans of the history of thrash.

Next up was Wake Up Dead by another pioneer of thrash, Megadeth. Shannon Bizzy, a regular during rock UJN’s and house band guitarist Ira Black blistered through this masterpiece. Not lost on anyone was the fact that Ira Black III shared the stage with his father!

There were many bands from the birth of thrash that never reached “commercial success” (if you compare them to bands like Metallica, Slayer, Anthrax etc), but are instrumental to the birth and growth of the movement. One of those bands is undeniably instrumental to modern metal as any. Like Trauma, who gave the world the mighty Cliff Burton; Exodus gave us two of modern metals ambassadors of metal… Metallica’s Kirk Hammet and Slayer’s Gary Holt. Toxic Waltz is without a doubt a metal classic. Trauma’s Joe Fraulob, along with Johnny Blade, Greg Coates, Alex Rivas, and Ekaterina Gorbecheva brought the song come to life for a younger crowd! These talented musicians stayed on board for Bonded by Blood!

No night dedicated to thrash can go without a bit o’ Slayer!!! One of the treats of the night was that the members of Divine Retribution joined Joe F and Jerry Montano for Angel by Death.

To keep with the “must have’s” Megadeth is one of them… The songs that got this guy on the Megadeth bandwagon were Holy Wars/Hanger 18. The two-guitar attack of Marty Friedman and of course Dave Mustaine was second-to-none for the longest time. Eduardo Baldo, Wena Velasco, Franki Lindia, Pablo Kravizc, and (sans his bass) Gabriel Conner took on Dave’s razor sharp vocals.

This evening was déjà vu for MAentGlobal; just a few nights earlier we were covering Testament as well as Slayer and Anthrax, down at FivePoints. Into the Pit was covered with the skill only a group of seasoned professionals could muster. Lonny Pasillas, Greg Christian (he actually has writing credit for this very song), Steve Robello, Steve S, and on vocals Lucas Muniz, deserve some serious credit.

The next two songs were from Slayer, let’s keep score… Slayer 3, Testament 1, Anthrax 1, Megadeth, 2, and of course Metallica…. 0 WHAT ZERO, ugh!!! That being said Raining Blood and Seasons in the Abyss were covered with pure precision and unbridled brutality!!!

Finally the no hitter was broken up… Dyer’s Eve one of Metallica’s most lyrical and musically demanding songs in their catalog was covered. This would end up being song #1 for this mind blown attendee. Monte Pitman stayed on stage to continue with guitar and vocal duties; Mike Dupke, Sam Harman, and Eli Santana joined him on stage.

Jesse Snider joined UJN donning, as mentioned above, his KoK’s Crown of Thorns and took his vocal duties to another level covering Metal Church’s Metal Church. Mr Ira Black, actually found himself donning the crown and he destroyed his fretboard.

Another treat came about when previous members, albeit at different times, of Vicious Rumors, Steve S and Ira B joined UJN’s ringleader Paulie Z for Don’t You Wait for Me.

Song #2 for the author of this piece was Sepultura’s 1996 release Roots Bloody Roots. It instantly brought memories of a bygone era, which MA got its start in. The tribal beat literally shook the walls of the Whisky with no remorse. Jordan Sasson expertly performed vocals and guitar duties; he was surrounded by Lucas Kanopa, Gabriel Connor, and Lago Marcondes.

The evening carried on with six more heavy hitters, including Metallica’s Seek & Destroy, Antisocial from Anthrax, and finally Megadeth’s Symphony of Destruction.

So if math serves me right the evening ended up with Megadeth having three hits, Anthrax two, and the final count for Metallica was only two… Hello everyone!!! You need to fix that before the next Thrash Tribute UJN!!! Just say’n.

Much respect to the venue and the artists for their performances, what a great way to spend a special occasion or just a Tuesday night out!! This is Hollywood at its best people!!

A conversation with HORSENECK and live review